My friend's daughter had twin boys back in March 2017.  I made them each a quilt.  I did say they'd probably be toddlers by the time I got them done and I was right. 😎

I was told they will be raised "gender neutral" - whatever that means.  I took it as a big hint not to make the standard "baby blue", which I would not typically do anyway (boring!!!).  Or trucks or things usually associated with "manly boys".  I happened to have some "science" fabric, and I think that's pretty "gender neutral".  We need more scientists of any gender.

I whipped up a couple of little quilts and named one "Science Fair" and the other "Beakerhead".  And before you get all steamed up thinking this is an insulting name - Beakerhead is actually a big science oriented event that is held every fall in Calgary billed as a "a smash up of art, science and engineering" - I think it's aimed at kids to get them interested in science.  Anyway, now that we have all the politically correct stuff out of the way, here are the quilts. 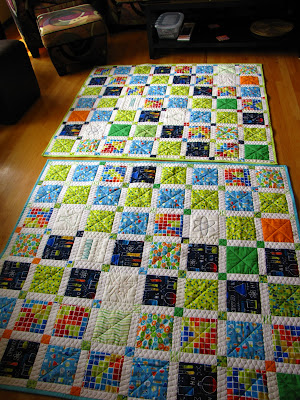 I found this irresistible fabric at a Calgary LQS and since I couldn't make up my mind which one I like best, I got 0.5m of all of  them. 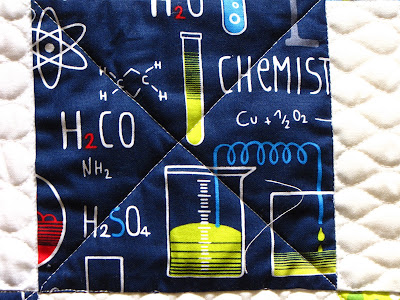 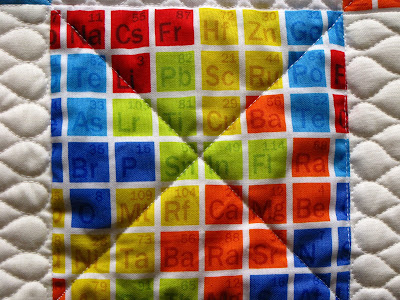 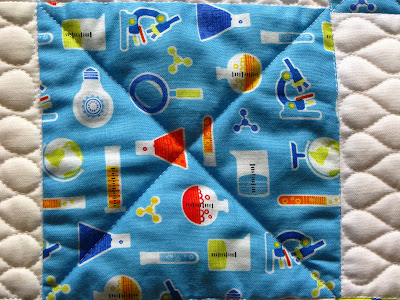 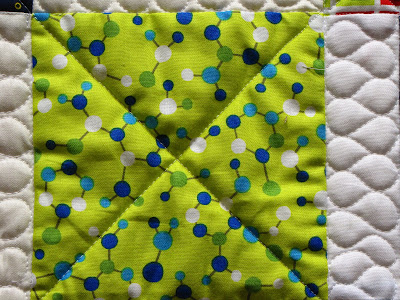 I cut as many 6" squares (5.5" finished) as I could out of each 0.5 m then make two piles - each with half of each of the four prints.  I decided on a quilt 7 * 8 squares.  I didn't have quite enough squares for each entire quilt so added some random fabric from my stash to make the extra squares. Then I separated them with a 2" sashing (1.5" finished) with cornerstones at each intersection (easiest way to keep the rows straight).  I used the leftover ends of the science prints then added in some of my random additional fabric for the cornerstones.  Quilted them both in one load (I love it when I can do that!) using wide backing. 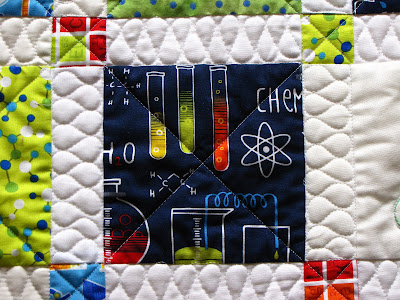 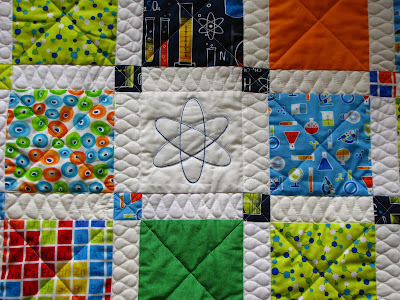 I decided to try out my EQStitch program that Joe gave me for my birthday over a year ago.  I drew out some embroidery designs using motifs from the fabric.  I was able to transfer the designs to my Janome 10000 to stitch out.  I still have a lot of learning to do on this program but I was pretty happy with the results for these little quilts.  (Joe helps me with all this computer stuff otherwise I'd be stuck back in the Stone Age.) 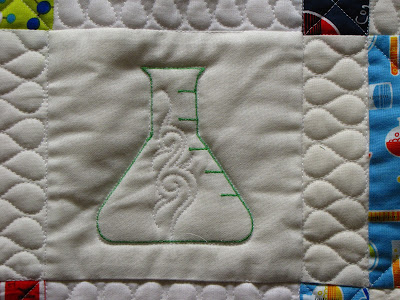 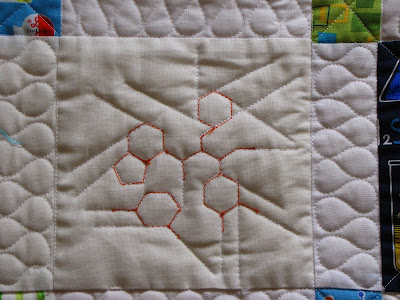 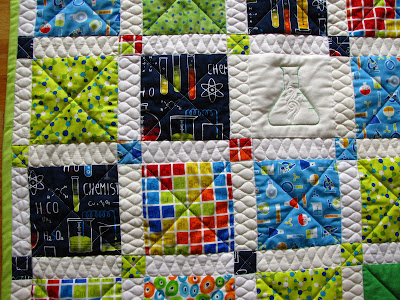 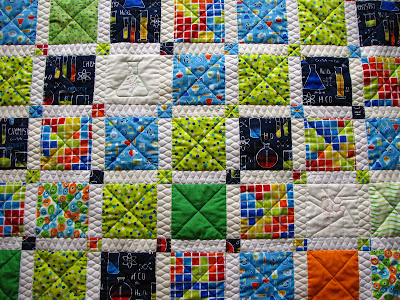 I bound them a couple of days ago.  I usually finish my bindings by hand but since these are going to little kids and will be used and washed to death (at least I hope so!), I finished by machine.  I used my new Juki and man - what a great machine!  It zipped through those bindings like nothing.  And fast!  I would have had to argue my way through it on my other machines.  I see more machine bindings in my future!

They will be going in the mail in the next few days.

Posted by No Rules Quilting at 2:02 PM

Email ThisBlogThis!Share to TwitterShare to FacebookShare to Pinterest
Labels: EQStitch