Last year a made a quilt for Joe's nephew and his wife.  Pat commented that they argue over who gets to use it so I thought I'd make them another one.  I don't want to be responsible for family fights!  😎

I'm still chipping away at my stash so this was an excuse to use a group of fabric that I like but just hadn't found a good project for.  It's mostly flowers so I decided on the Bethlehem Star block, which I've seen used in other quilts and liked - it sort of looks like a flower.  I don't often do standard block quilts, so this is a bit of a change for me.  I get bored making the same block over and over again!

I drafted this out as a 12" block, cut most of the white bits and a lot of coloured bits then made the first block.  It turns out they take well over an hour to make - at least for me - maybe I'm slow.  But they are fussy.  I thought if I hadn't cut so much out, I would have reprinted in a larger size (it's easy to do with EQ8).  But I had so much cut I just kept making them.  I put a 1 1/2" sashing between the blocks and around the outside but I wanted it a bit bigger so added a border rather than make any more blocks  - 20 was enough!

In the end, I'm really happy with the way it turned out. 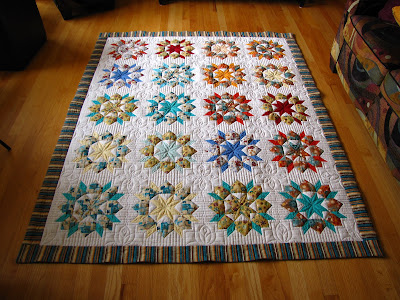 I did a facing instead of binding on this quilt and I really like the way it looks.  I've done a few minis with facing just for practice and I think I've "got it" now!  I did this one simply because I didn't have a suitable binding fabric.  I actually was going to use the striped fabric for binding but decided to make the quilt bigger so used it as a border instead (a really wide binding!  😎).  I used the backing fabric for the facing. 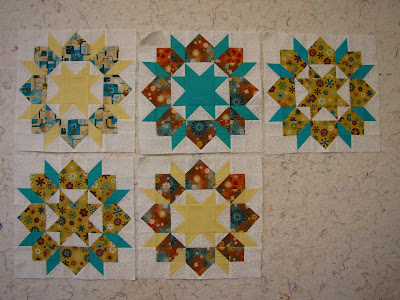 In the beginning.... there were blocks. 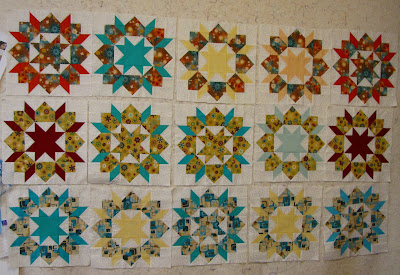 And then there were more blocks....
The blocks consist of HSTs, FGs, squares and a "house" block (square with two corners cut off).  I used three Studio 180 tools - the Tucker Trimmer to do the HSTs, the Wing Clipper for the FGs and Corner Pop for the houses.  They produce really nice blocks quite easily.  (I'm not on the payroll, but like the product, I have it, so use it.) 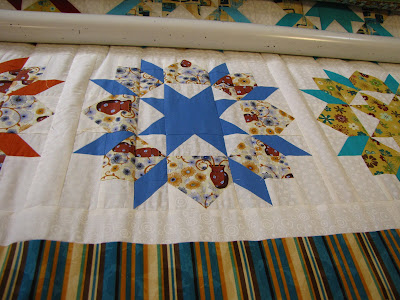 I  took this pix (above) once I hit the bottom row after stitching-in-the-ditch  - I went around all the blocks between colour and white - and between the border and white using Wonderfil Decobob thread. 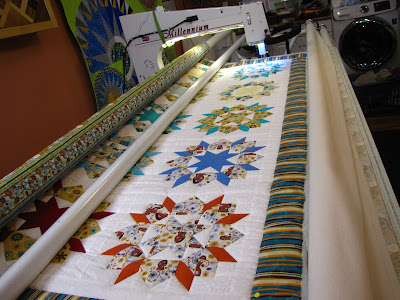 Above, ditching is complete.  So, time to start actual quilting (below).  I switched out to Glide thread. 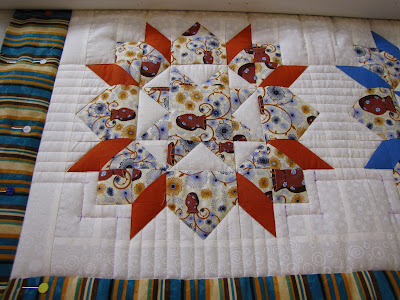 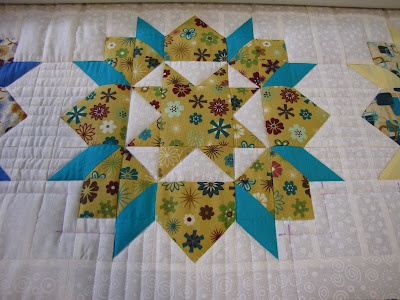 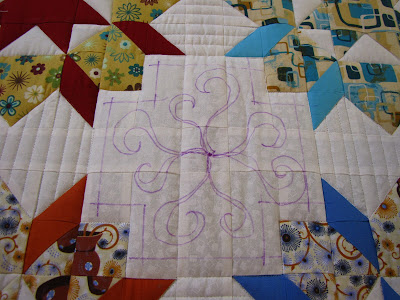 Between the "flowers" this secondary design element emerged.  I didn't know how I wanted to quilt it.  In fact, the only thing I knew when I loaded it was that I wanted the horizontal and vertical lines between the "flowers".  Didn't know how I was going to quilt the flowers or this open area.  (If I waited until I knew how I would quilt a quilt before I put it on the frame, I'd never get any quilts quilted!)  I did know I wanted to "frame" it so it would stand out as a separate design element.  As I went across this first row doing the vertical/horizontal lines, I drew out some design ideas for the secondary space using my air erase purple pen.  The one above is a "no". (I don't always do it this way - sometimes I sketch on paper - sometimes I just start quilting.) 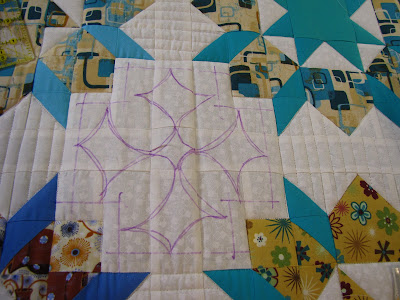 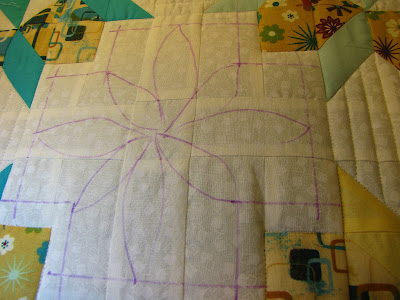 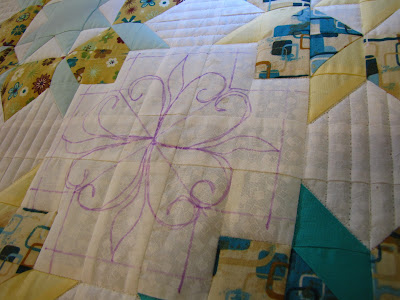 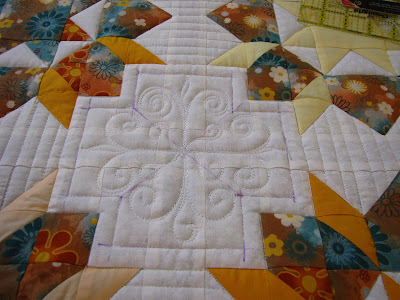 I actually stitched this one out - that's when I didn't like it.  I think the idea is a good one but I would want to make a template and carefully stitch it so it's all  as "perfect" as I can get it and I didn't want to take that time.  Not for this quilt.  So I ripped it out.  You'll see the one I went with stitched out below. 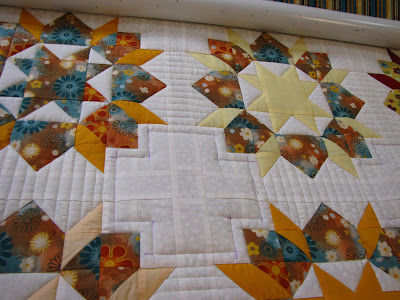 Here is a "frame" for the secondary design. 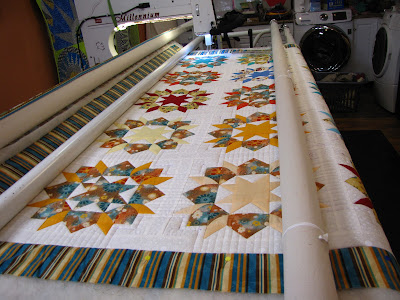 More quilting and I'm back to the top (ditched top to bottom and rather than roll back up, simply started quilting from the bottom and worked back up to the top). 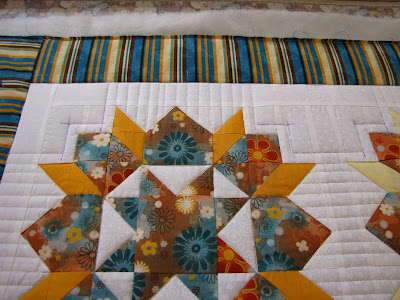 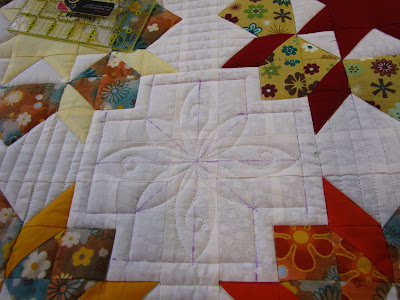 Here we are with a stitched out secondary design.  I like it.  I used my trusty circle rulers - very fast, everything is "perfect" - symmetrical.  Just the way I wanted it to be. 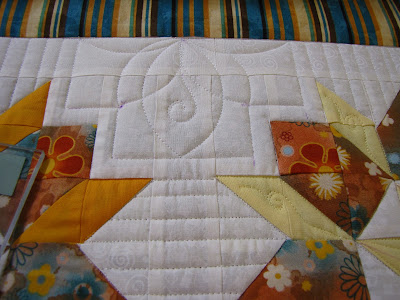 This is what went into the partial secondary spaces along the border. 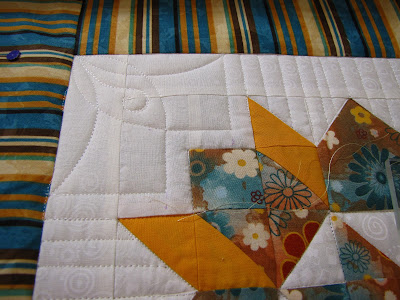 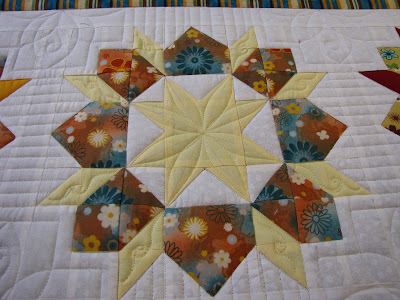 And I had to work out how to stitch the flowers.  This is what I settled on - I opted not to quilt the printed "house" sections.  I used my large "boomerang" ruler to do the centres.  I wanted a smooth curve, but it had to be relatively flat.  Using a section of this ruler worked out well. 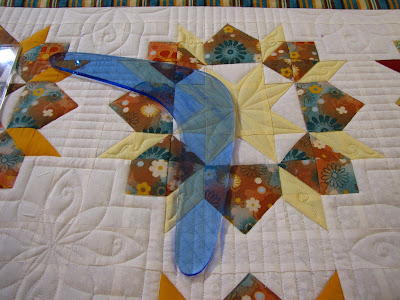 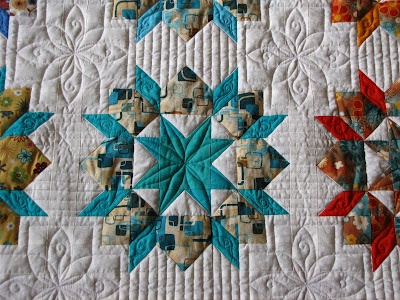 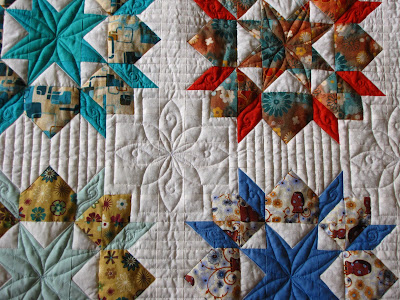 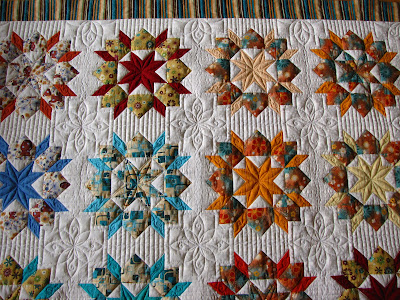 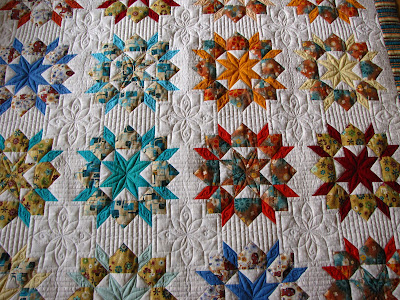 This will be gifted in September.

Posted by No Rules Quilting at 3:52 PM

Galaxy, Mondrian and Art Deco are now available as downloadable PDF patterns at my NoRulesQuilting Etsy Store. Clicking on the logo above will take you there.