I usually start off with the finished quilt but in this post wanted to show how I quilted two quilts with one load (for beginner quilters - I know the more experienced quilters will have this well in hand). 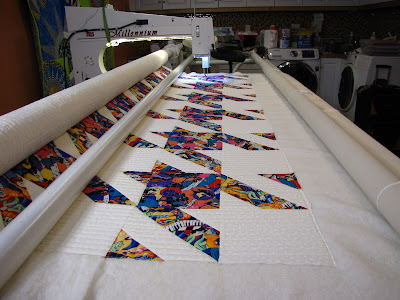 I had a piece of wide backing - but it still wouldn't be wide enough for two quilts both about 5' wide so I added another 18" or so on to one end (it's what I had left) - more would have been better so I stitched my leader on to the top end so I could start about an inch down from the top of the backing.  Above is the hounds-tooth quilt finished to the bottom of the quilt. 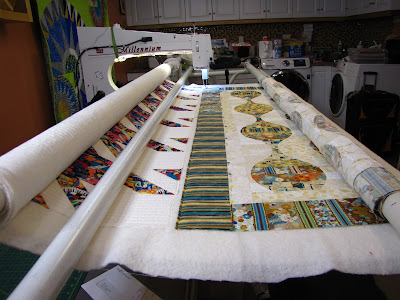 Instead of taking the finished quilt off the frame, I loaded the second quilt - about an inch below the first quilt. 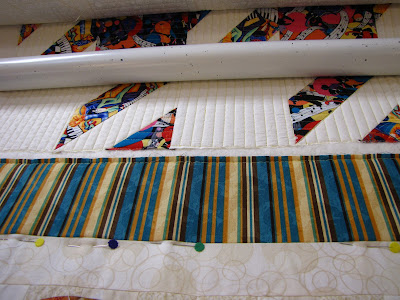 Then I just kept on quilting until I finished the second quilt and took both quilts off the frame, trimmed, bound (machine bound! something I don't usually do - but for these ones, I didn't want to spend a lot of time - wanted to get them done!) and labeled - done!  Yay! 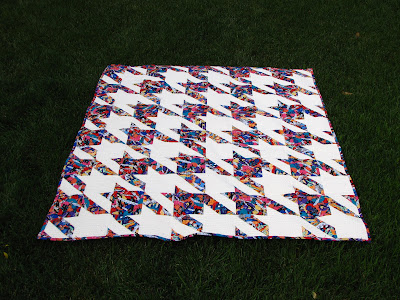 I started this one as a class demo.  I'm in a UFO finishing frenzy so finished piecing it a few weeks ago and put it in the "to be quilted box".  I grabbed it a few days ago to quilt.  I'm calling it Jazz Hound. 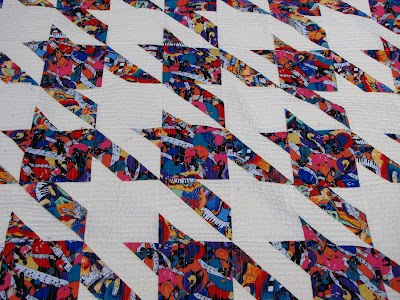 It's quilted with straight lines spaced at 1/2".  I didn't mark, just used the markings on my ruler.  Horizontal in one set of blocks, vertical in the other - white or coloured depending on the viewing direction. 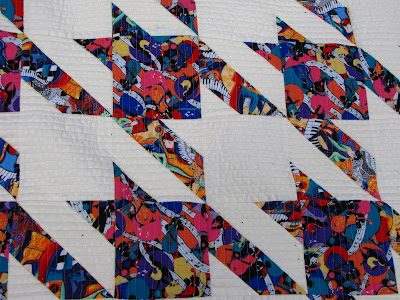 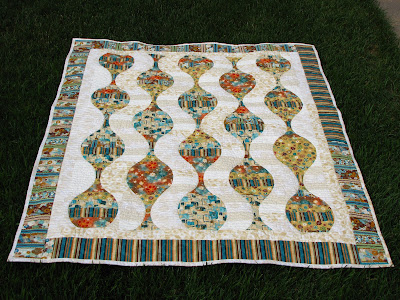 This is the second quilt - I'm calling it Lava Lamp.  It's a pattern called Whisper by Toby Lischko.  I had a lot of fabric left from the Bethlehem Star quilt I made a couple of weeks ago so wanted to use it up.  This was my attempt at that - but I still have a fair bit of it left!  I'll have to think of something else.  😎 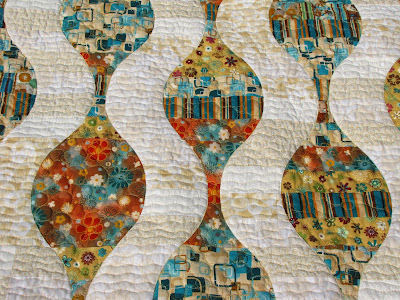 I didn't want to spend a lot of time on this one but I did want the wavy shapes to be emphasized.  I stitched the ditch between the "white" and coloured fabrics.  Then in the "white", I did wavy lines at about 1/2" intervals - maybe a bit more.  Then in the coloured parts I did very large pebbles - sort of like lava lamp bubbles.  😎  Piano key lines in the border.  Nothing measured - I just stitched in the stripes. 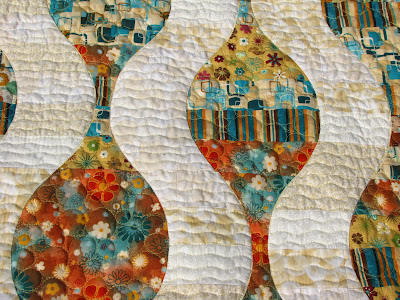 For both quilts I used yellow Masterquilter thread by Wonderfil.  I haven't used Masterquilter much because I have tons of Glide but since both of these will be gifted as "utility" quilts, I thought it was a good opportunity to try out this thread.  It runs well in my machine so I would give it a thumbs up.  The thing about Masterquilter is that there is a limited number of colours and it's a matte finish.  Neither of these things is a problem as long as you can find a colour that works and don't mind the matte finish.  I like Glide because it has a shiny finish, but that's just my personal preference.  And there are many more colours to choose from.

Posted by No Rules Quilting at 8:32 PM

Galaxy, Mondrian and Art Deco are now available as downloadable PDF patterns at my NoRulesQuilting Etsy Store. Clicking on the logo above will take you there.