This is my own Tula Pink Butterfly quilt.  I'm calling it "Butterfly's Garden".  I quilted one for Gillian awhile back.  Coincidentally, mine was under construction at the time.  I got the kit from Craftsy well over a year ago - I think sometime in 2016  - and started chipping away at it last spring.  I put a push on and finished the top late in the fall but didn't get around to quilting it until after Christmas.  I finally got the binding and a label on it for our long-arm group meeting yesterday so it's on the list of completed UFO's. 😎

It's mostly Tula Pink fabric, obviously, but I did add a few stash fabrics that worked.  Also, I bought more of the background fabric for the borders.  I liked the fabric in the kit - but not for the border.  I wanted the butterfly to be the main event and felt that anything other than the background would detract from that.  I also added an extra six inches on each side because I may want to actually use this one on a bed!  In the end, it's a huge quilt - not quite king, but certainly a generous queen.

I am often asked how I figure out how I am going to quilt a quilt.  The concept for this quilt is "garden"....  keep going for more explanation .... 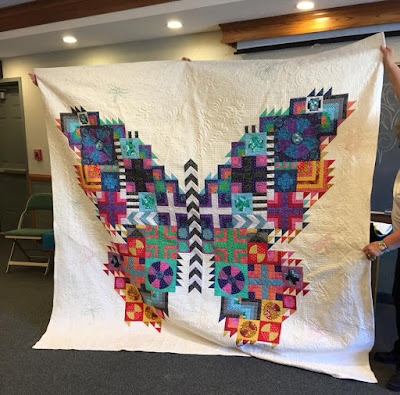 Because its so big, I don't have a good space in my house to get a decent shot of the whole quilt, draping it over some furniture is the best I can do (below).  Lee D, in our long-arm group, took a pix of it yesterday so I'm stealing her pix (thanks Lee!), which is the pix above. 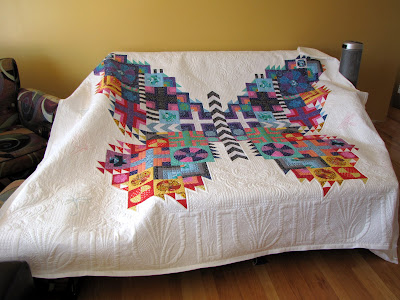 My idea for this quilt was that it would be a garden, hence the name.  The design along the bottom border is adapted from a book of Art Deco wrought iron designs.  The idea is that it's a wrought iron fence around the garden (below). 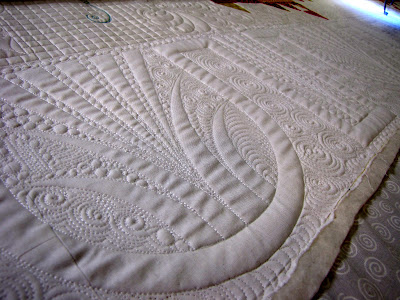 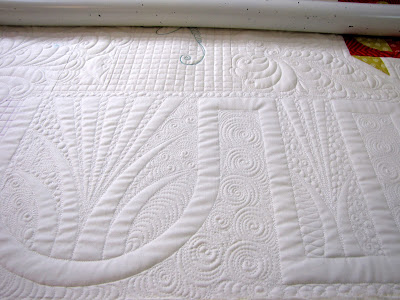 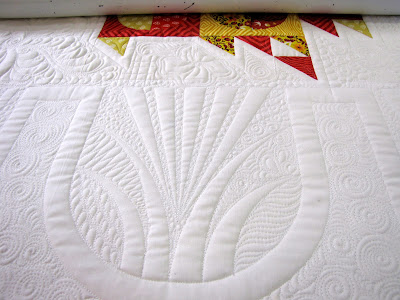 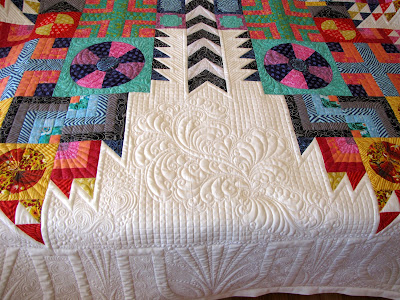 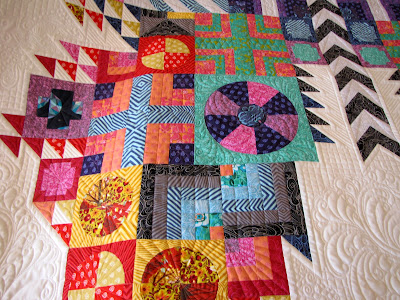 Of course there will be other butterflies and some dragonflies in the garden.... and flowers.... and leafy things (feathers). 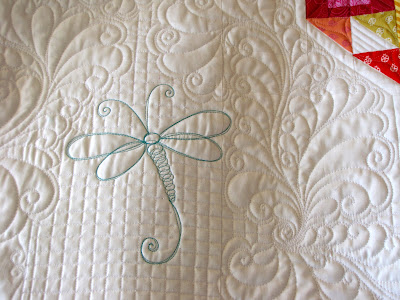 For this quilt, I started by ditching all the blocks in the butterfly using DecoBob thread (most of the rest of the quilting was with Glide) .  Then I quilted the antennae.  It took a couple of tries to get them more or less symmetrical as I'm not computerized - this is one place where it would be handy.  But in the end I like the organic result of not-quite-perfect.  I pinned the borders down as I went.   Once I got to the bottom of the butterfly wings, I went back and quilted the butterfly blocks.

When the butterfly was completely quilted (I did change colours to blend with the fabric in most cases), I did the half inch outline all the way around.  Next - I  stitched in the outlines for the "wrought iron fence".   Then I stitched in the butterflies and dragonflies.  Note that I used coloured thread for these motifs.  All the rest of the background/border quilting is with white.

I gradually worked my way around the background and border, filling it in with what I hope turns out to be fairly balanced.  I don't usually sketch out what I'm going to quilt - it's all in my head so I just hope it works because all I can see at any one time is what is between the roll bars.

A note about the grid quilting.  First - I measure it and draw it on with air erase pen.  Second - it's ruler work.  Third - I often use a grid as a background when an area needs to be quilted but I don't want to put a busy design in that place.  In the pix above, as an example, if I had put feathers where the grid is, the dragonfly would disappear.  The grid is a sort of "neutral" quilting design that goes in "behind" a motif or feature design. 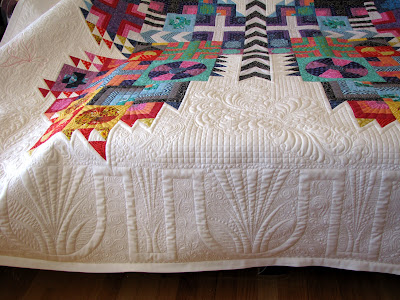 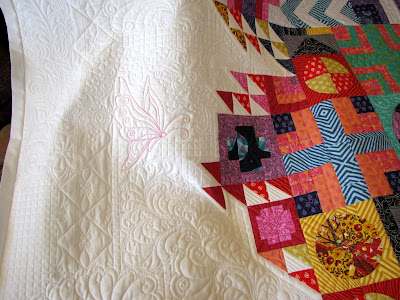 Above - can't see it very well but there's a "lattice" running up along each side. 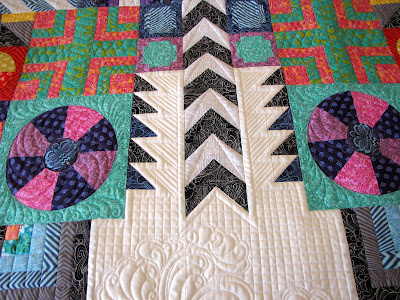 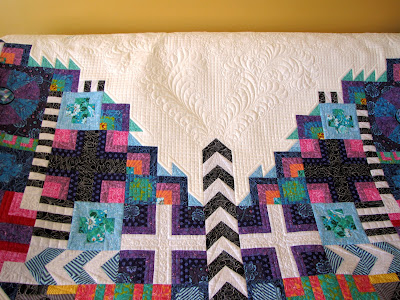 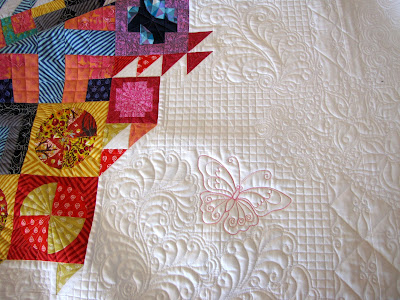 Above - the "lattice" on the right hand side - the diamond shapes.

And that's my Butterfly's Garden.

Posted by No Rules Quilting at 8:07 PM