It's a fun challenge to do an occasional T-shirt quilt.  I will only do one if I can custom design it - I don't want to just cut the Ts into 12" blocks and sew them together - boring!!!!  So if a customer is willing to take a chance on my whimsical mind, I will consider doing a quilt for them with their prized Ts.

This one came in from Heather.  She had secretly collected up all her fiance's favourite rock'n'roll Ts with one very special one that she wanted as the centre.  The quilt was to be a wedding gift for their August wedding.  I think I can blog about it now as it's almost the end of August and I figure Jonathan will be a bit distracted by the latest events and won't be worried about searching the internet for a T-shirt quilt that he won't know about until it is given as a gift - which it probably has been by now!  😎 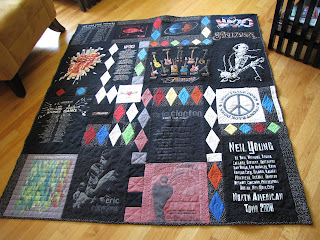 With the exception of one white, one grey and one sort of pinkish T, they were all black, which was a challenge as I like to use the unprinted left-over parts of the shirts to make "filler blocks" - but all black is just no fun for me!  So I went to my stash of Kona cotton and managed to find some reasonably close matches for the colours in the central guitar T.  The guitars are quite colourful.  I used the Kona and the background/backing Thicket cotton (chosen by Heather) to make a bunch of diamond blocks.  I cut these with my new Studio 180 Diamond Rects tool.  Works like a charm.  I also made some square-in-square blocks - also cutting/trimming with a Studio 180 tool.  No - I don't sell them, and don't get a commission - I just started using these tools and really like them.  That is all.

I don't have a scientific design method.  I cut the printed parts of the Ts into blocks divisible by some constant number - although even that is not a rule as there are times when that just doesn't work. Which is why I need filler blocks.  The Ts don't snap together like Lego, so I make them fit by putting in the filler blocks.  I try to arrange them in a nice way on my design wall - then sew them all together. 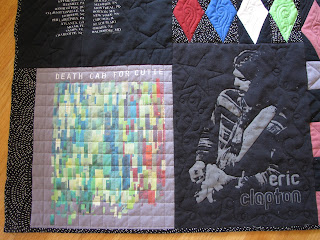 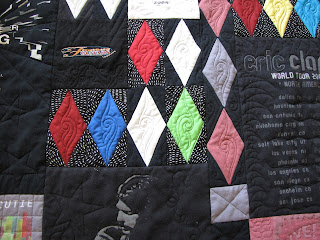 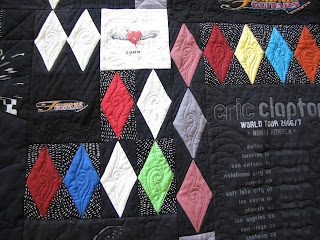 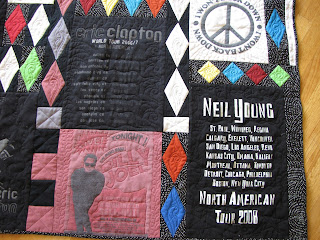 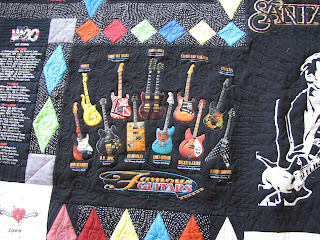 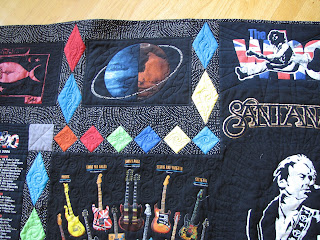 And below is the back - I put a couple of labels in and used up the last four diamonds that didn't make it into the front.  One label is the "to Jon from Heather" label and the other is my "made by..." label. 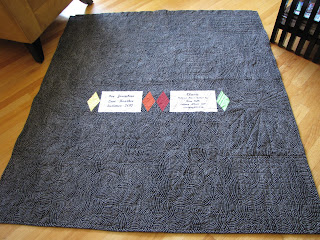 When Heather picked it up, she seemed really happy with it - always a relief!  She is a very nice young lady and I wish her and Jonathan all the very best!!!!

Posted by No Rules Quilting at 3:46 PM