Sugar Skulls and some Misadventures Sugar Skulls!  It's a Tula Pink pattern from the book Quilt With Tula and Angela by Tula Pink and Angela Walters.

This was the last quilt in my "to be quilted" box.  It took me almost two years to get through them all  (since I stopped doing customer quilts).  Of course I made more as I went.  But now I literally have no more quilt tops to quilt.  So I guess that means I have to get busy and make some more!  😎😎😎

Here are some close ups of the quilting - spider webs, a few spiders and some "wrought iron" inspired curves in the orange.  The border is one inch piano keys with grid in the corners where they overlap and one inch grid in the skulls. 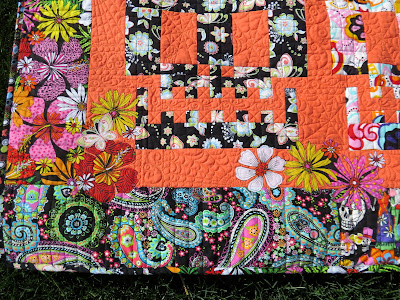 I appliqued a few flowers in the bottom - I'll talk more about that below. 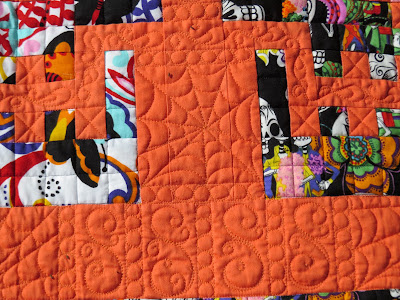 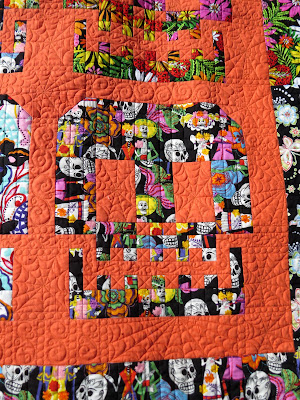 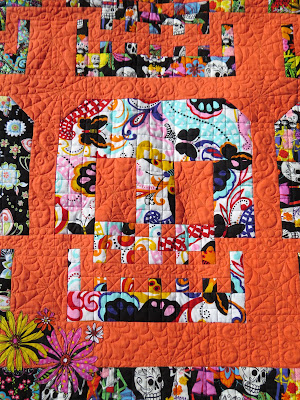 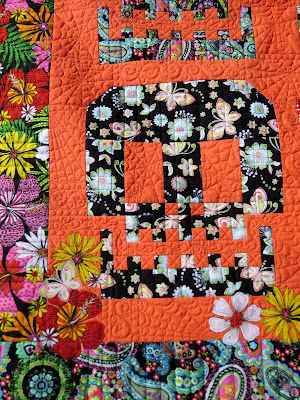 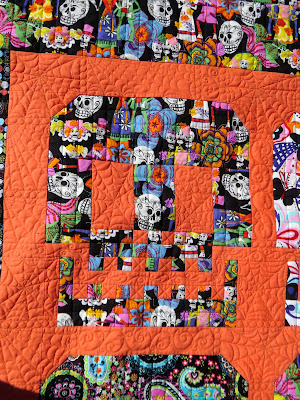 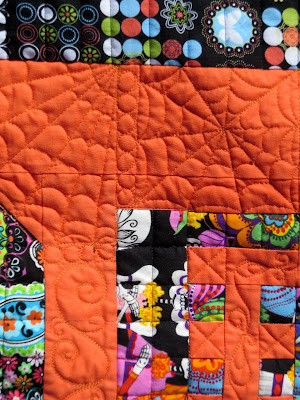 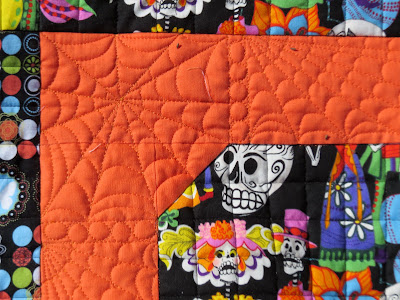 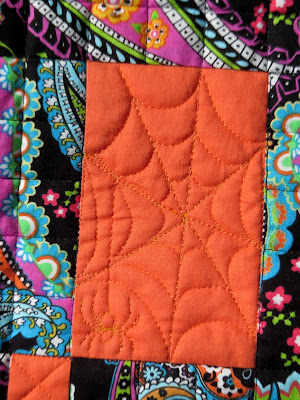 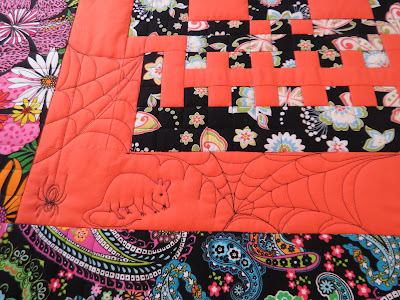 I started off with black thread and lofty ideas of "drawing" spider webs, spiders, rats, snakes and whatever creepy stuff I could think of.  These pix show a bit of what it was starting to look like. 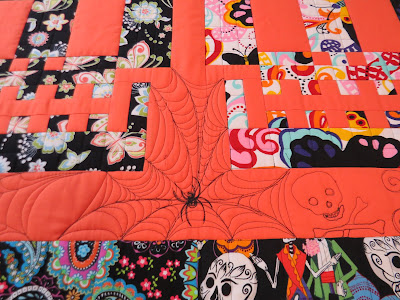 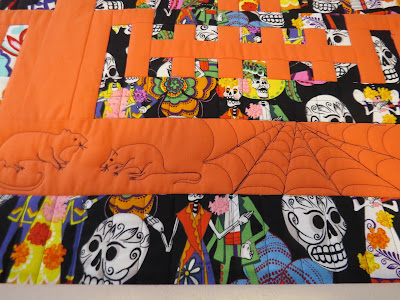 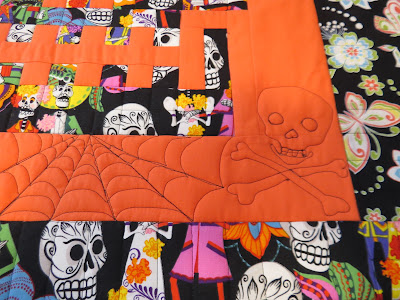 But I decided I didn't like it.  It just looked "scribbly" and my "drawing" isn't good enough - the black thread showed all the glitches a little too much for my liking.  So I decided to rip it all out. 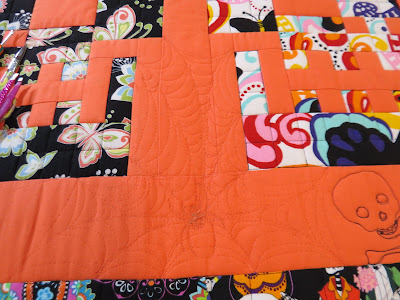 And, predictably, it "left a mark". 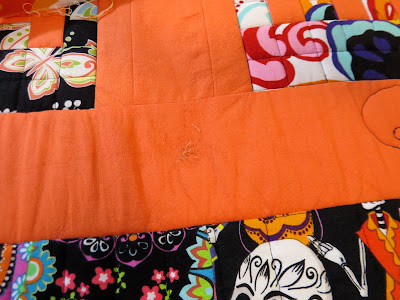 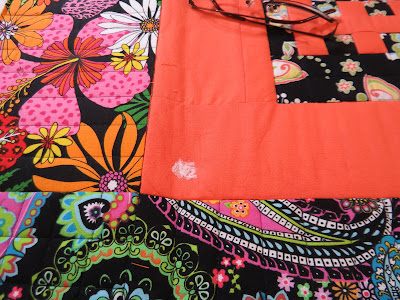 The usual treatment of  spraying water and a finger rub took out most of the evidence.  However, the worst marks were where the spiders were - there were actually holes there.  I picked up some Bo-Nash earlier in June and thought I'd give it a try. 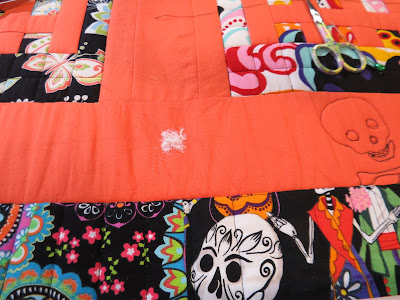 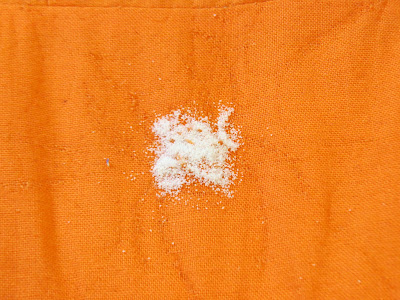 This is the Bo-Nash powder before being pressed. 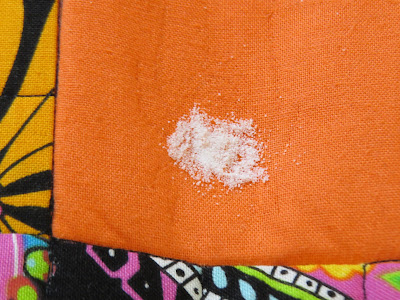 When I pressed it, it left a nice crunchy mend (I thought I'd taken some pix of that but I guess I didn't).  I think I used too much.  I need a Bo-Nash lesson.  Anyway, the holes were fixed in that the fabric will not fray out, but it was very visible.  I decided to go ahead and quilt the quilt as I was planning to - with orange thread this time and not be quite so adventurous with the drawing - also, I really just wanted to get it finished at this point!  I decided to hide the holes with applique once the quilting was finished, which is what I did. 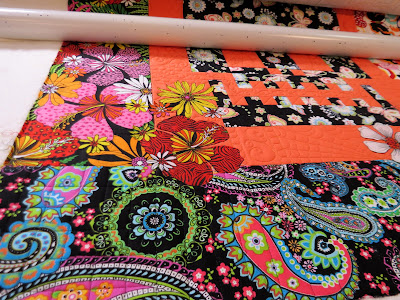 I pressed some Heat'n'Bond to the back of some of the flower fabric and cut around the flower groupings that I wanted.  Then I pressed it on while it was still on the frame because I wanted to try stitching around the raw edge with the long-arm.  I did this.  Once I took it off the frame, I pressed it again to be sure it is stuck on really well.  I'm pretty happy with the way it turned out and it saved the quilt.  I wouldn't bother with stitching around the applique next time - I think it's quite well stuck on so it didn't really need the stitching at all.  If it turns out that this quilt actually does get some use, I might consider doing a satin stitch around the applique, but for now, I'm not going to bother. 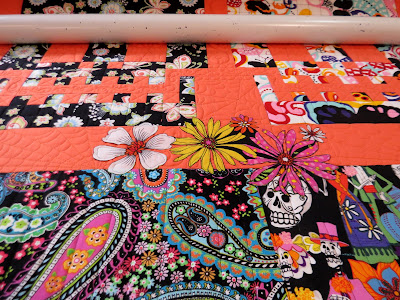 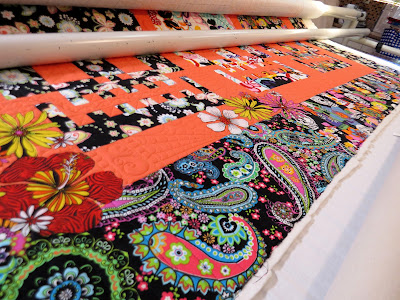 One final note: I tend to experiment with my quilts - this is one experiment I would never do on a customer quilt! I do try new design ideas and usually like them - but usually the designs are a bit more conventional.  I rarely rip so this is a real exception - I usually don't hate it enough to rip.  I've quilted with contrasting thread before and really liked the results, but this time, it did not make me happy.  It was the glitchy drawing that was the deciding factor - I just was not happy with it.  Will this stop me from experimenting?  Nope.  That's what makes quilting fun - trying out new things.  Usually they work out just fine.  And it's not brain surgery so no one dies if things go sideways!  😎😎😎
Posted by No Rules Quilting at 8:27 PM